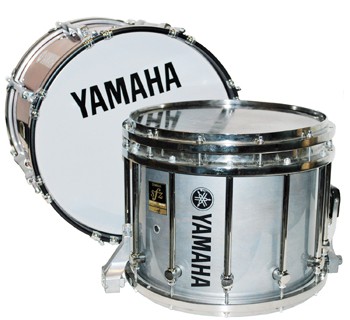 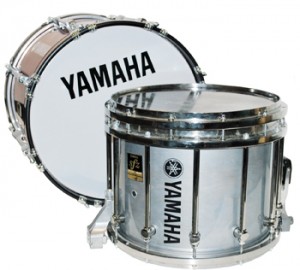 The Yamaha Corporation of America contributed two drums used by World Champion DCI organizations to celebrate the 2009 opening of the RhythmThe systematic arrangement of musical sounds, which creates a flowing and/or syncopated pulse. ...! Discovery Center in Indianapolis. The first, used by the seven-time DCI World Champion Cavaliers in their 2004 DCI Championship show, is an MTS-9214 SFZ snare drumOne of the more common drums in marching bands and drumlines and the primary drum of a drum set.... This 12-lug, 14×13-inch drumA hollow cylindrical shell of any size that has a head stretched over one or both ends and is b... was custom designed for the Cavaliers with a 6-ply, all-maple shellThe cylindrical body of the drum, usually made from plywood. finished in a silver lacquer. As the theme for their show that year was James Bond, the color was intended to emulate the finish of Bond’s car. In addition, the standard hardware on the drum was customized with a Dark Chrome finish. The drum also features a quick-release, 10-strand snare strainer for ease of changing heads, die-cast aluminum suspension rings and rims, thick-walled aluminum lug posts, and Stabilizer Power Posts, which assist in the quick-release process for changing the bottom head.

The 8200 series 18×16-inch bass drumThe lowest pitched drum in a marching band or with a drum set. A two-headed drum, it is usually... was used by the nine-time DCI World Champion Cadets in their 2003 and 2004 shows. Made specifically for the Cadets, it features a 7-ply maple shell with a custom bronze finish. The drum also features birch hoops, eight aluminum die-cast lugsThe tension rods (or screws) that hold the hoop and drumhead onto the drum., and solid, ribbed-steel claws.