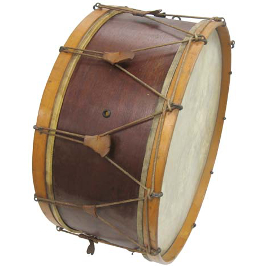 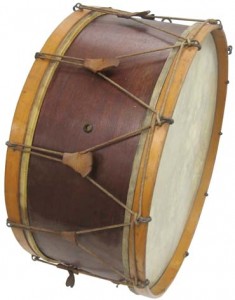 The Rudolph Wurlitzer Company was established in 1856 in Cincinnati, Ohio by Rudolph Wurlitzer (1831–1941), a German immigrant whose family had manufactured and sold musical instruments for over a century before his birth. Wurlitzer’s Catalog Number 118, dated 1921, states that Wurlitzer is the “Largest General Musical House in the World,” and as such, manufactured and sold all types of drums and percussion instruments.

Page 75 of the catalog bears the heading “The Unrivaled Wurlitzer Bass Drums” and includes the Model No. 1460 Bass DrumThe lowest pitched drum in a marching band or with a drum set. A two-headed drum, it is usually..., a rope-tuned drumA hollow cylindrical shell of any size that has a head stretched over one or both ends and is b... available in ten different sizes, ranging from 12 to 14 inches in depth and from 24 to 36 inches in width. The drum was available in either maple or mahogany shells, and it had detachable leather ears with “improved type cord hooks.” Twelve ears, each with a pair of hooks, are shown on the catalog picture.

This 12 x 26-inch drum was part of a collection belonging to Tom Lonardo, Sr., who owned Lonardo Piano Co. in Paris, Tennessee from 1963 to 1991. It features a 3-ply mahogany shell—reinforced inside by two maple hoops—and natural-finished maple counterhoops. Though originally manufactured with twelve leather tuning ears, only eleven decorated, leather tuning ears remain. These ears, in conjunction with the eleven “improved” cord hooks on each side of the drum, provide tension on the rope for tuning the two calfskin heads. Inside, a prominent paper label identifies the maker: “The Rudolph Wurlitzer Co. Manufacturers of Drums, Band Instruments. Cincinnati, O. Send for Catalogue.”