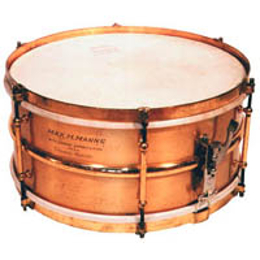 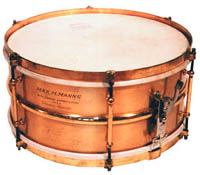 The 6-lug, 6-1/2 x 14 inch, gold-plated drumA hollow cylindrical shell of any size that has a head stretched over one or both ends and is b... belonged to Max H. Manne, Shelly Manne’s father. It was a gift from Vernon Castle, who, with his wife, formed a famous ballroom dancing duo. This was the first gold-plated drum manufactured by Ludwig & Ludwig and was presented to Manne when he left Castle’s orchestra to become manager of productions at the new Roxy Theatre in New York.

The black-lacquered, 7 x 14-inch drum, made for Elden C. ‘Buster’ Bailey, was the first drum (other than Gladstone’s personal one) that he manufactured. The inscription plate reads: ‘Elden C. Bailey, Philharmonic Symphony Orchestra of New York, October, 1949, Drum #0’

On loan from Elden ‘Buster’ BaileyClose-up of the inscription showing the dedication from Castle to Manne.