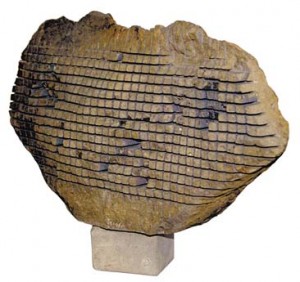 The practice of creating musical instruments that are also artistic works has been common throughout the ages. Some familiar examples are the ornately decorated claviers, harpsichords, and organs of the Baroque era, as well as the fancifully engraved brass instruments of the late 19th and early 20th centuries. A “sound sculpture” is an artistic creation that functions not only as art, but also as a musical instrument.

Pinuccio Sciola, a Sardinian artist born in San Sperate in 1942, has gained wide recognition for his innovative use of rock sculptures that also function as musical percussion instruments. Beginning with a selected basalt stone, Sciola modifies its shape by cutting patterned fissures with a circular stone-cutting saw. Other than the fissures, other aspects of the stone are left untouched. This process presents the rock in its most natural state, but brings to life a new meaning for the stone when the facets created by the fissures are struck.

When struck with a variety of implements, these facets can produce numerous timbres, which are often perceived as coming from deep within the stone. The sounds have been variously described as “metallic whispers, deep, hoarse laments, deaf hums, liquid sounds from ancient times, to unite with the voice of the present.”