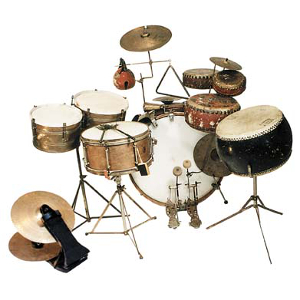 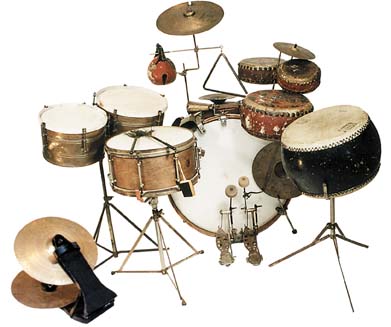 PASThe Percussive Arts Society is a music service organization whose mission is to inspire, educa... More Hall of Fame member Roy C. Knapp, known as the ‘Dean of Percussion’ by his many students, had an illustrious career as a performer and teacher in the Chicago area. His better-known students included Gene Krupa, Dave Tough, George Wettling, Baby Dodds, Sid Catlett, and Louie Bellson. Knapp’s performing career spanned 1910 to 1961. In addition to performing in theaters, television, and with the Minneapolis Symphony, Knapp spent much of his career performing on WLS radio in Chicago, where he played on the ‘trap’ set that is now in the PAS Museum.

The foundation drums of Knapp’s set, which mostly dates from the 1920s, are a single-tension 12 x 24 wooden-shell bass drumThe lowest pitched drum in a marching band or with a drum set. A two-headed drum, it is usually... and a 6 x 14 wooden-shell snare. The snare has eight tube lugsThe tension rods (or screws) that hold the hoop and drumhead onto the drum. and is one of the earliest models produced by the WFL Company. The set includes four Chinese tom-toms (ranging in size from 3 x 6 to 9 x 12), a pair of copper-shell timbales, a ‘snowshoe’ pedal, and numerous woodblocks, cowbells, temple blocksA set of wood blocks that vary in size and pitch, are generally mounted on a stand and played w..., triangles, and cymbals.

The temple blocks and smaller Chinese toms are ornately decorated and painted. The set also features a unique, double bass drum pedalThe pedal used to play the bass drum on a drum set.   that allowed Knapp to play just the bass drumA hollow cylindrical shell of any size that has a head stretched over one or both ends and is b... or both the bass drum and the vertically attached cymbalA copper/bronze (or variation of metal alloy) disk struck with a drumstick or crashed together .... One bass drum pedal is an original 1909 Ludwig & Ludwig pedal, while the other is a modified 1924 Ludwig & Ludwig model.

The ‘snowshoe’ Charleston cymbal pedal is a forerunner of the modern hi-hatA piece of the drum set, consisting of two cymbals mounted on a stand. The cymbals are opened a.... It features two pieces of wood shaped like snowshoes, hinged at the heel. Between these wooden ‘shoes’ are two cymbals that face each other. The performer’s foot is inserted in a strap on the top shoe and used to tap the two cymbals together.