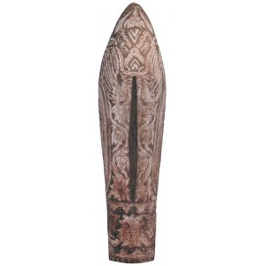 Drums carved from a solid piece of wood, with a hollowed out center, are found as indigenous instruments throughout most of the world. The center “slit” creates two sides to the log that, when struck with sticks, usually produce two resonant pitches. Slit drums were often associated with ritual or dance in early cultures, and could also be used as a means of communication. These log drums vary in size, as well as number of players, and are usually placed in a horizontal position for performance, although they may be found elevated at one end, stood vertically, or suspended by ropes or chains.

This highly ornate drumA hollow cylindrical shell of any size that has a head stretched over one or both ends and is b... originates in the islands of the South Pacific and is carved from the root end of a primitive palm-like plant. The rather soft wood results in a deep, sonorous timbre. Designed to be displayed vertically, its overall shape and carvings suggest that it was intended for use in some type of fertility ritual. The instrument is decorated with bas-relief carvings arranged symmetrically along the drum’s vertical axis.

The largest carvings are an identical pair of costumed female figures, positioned prominently on either side of the slit. Above, a pair of birds appear, placed beak-to-beak at the top of the slit, with wings and tail feathers flowing around the drum’s upper section. Completing the design is a single, central bull’s head dominating the upper cone. A wide band of floral detail fills the drum’s lower portion. This motif also runs along either side of the slit, and an image of a pineapple-like fruit is positioned at the base of the opening.

The drum stands about 87 inches tall, with an approximate circumference of 72 inches at its widest point, producing a diameter of about 23 inches. The diameter of the base is 16 inches. The bottom of the drum is enclosed, like the end of a barrel, with three planks of wood.