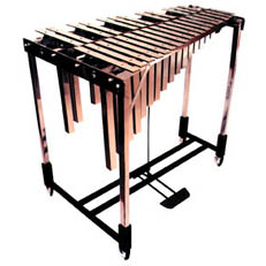 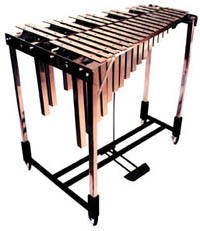 Angled view showing the instrument on its base with damping pedal. Note the square construction of the resonatorsThe metal pipes that extend below the bars on a marimba, xylophone, or vibraphone. They carry t..., which were manufactured as strips of meteoritic compound and then welded together

Donated by Perry and Nancy Preusch

Inspired by Halley’s Comet, the Celestaphone was constructed by Clair O. Musser as a combination of his interests in music, astronomy, meteorology, metallurgy, meteoritics, acoustics, musical physics, and holography. Musser began collecting meteorites in 1936, continuing to acquire them for over four decades from all parts of the world. He collected over 1,388 pounds of the rare space material, and used 678 pounds from his collection to manufacture this ‘one-of-a-kind’ Celestaphone.

After being scientifically analyzed, the meteorites were classified for use in the bars, frame, or resonators based on the elemental content. In addition to the 30 ‘Meteoritic Tone Bars,’ over 353 parts were machined for the resonators, frame, and other portions of the instrument. Except for the bolts, all metal parts of the instrument are of ‘meteoric metal.’

The Celestaphone weighs 83 pounds, including 12 pounds for the bars, 51 pounds for the frame and resonators, and 20 pounds for its base and cover. Tuned to A=440, it has a two and a half-octave range, G to C, beginning on G below the treble-clef staff. All bars are 28mm wide and range from 29.3 cm to 11.8 cm in length. Due to the long sustain of the bars, there is a pedal for muffling the instrument. It can be played with mallets, or bowed for music that truly sounds ‘celestial.’