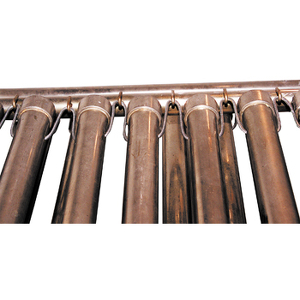 As a substitute for large church bellsAn instrument that consists of tuned metal bars mounted on a rectangular frame, and played with..., instrument manufacturers began marketing tubular chimesAn instrument consisting of a series of cast brass tubes, which are mounted and arranged in ord... during the latter part of the 19th century. These chimes were at first suspended in a single row, with the accidental pitches being distinguished by a different color. One could also hang one, two, or several chimes needed for a specific piece on a separate stand. Eventually, a mounting system was devised with not only raised and offset accidental pitches, but also a damping system operated first by hand, and then by the foot of the player in order to stop them from ringing.

The Rowland H. Mayland Company manufactured a wide variety of musical bells and novelties, including hand bells, glockenspiels, tubaphones, xylophones, pitched sleighbells, marimbaphones, tuning forks, and tubular chimes. Established in Brooklyn, New York, in 1866, Mayland continued to manufacture hand bells until World War II, although the company had abandoned the other musical instruments decades earlier. Mayland’s chimes were available in either 1 1/8 inch or 1 1/2 inch diameters, with a wide variety of ranges from one octave (eight tubes, diatonic) to two octaves (25 tubes, chromatic). The larger diameter chime tubes were manufactured with a patented head and sold under the model name Elite Tubular Chimes.

Bearing the manufacture’s label “Rowland H. Mayland and Son,” this set of tubular chimes in the PASThe Percussive Arts Society is a music service organization whose mission is to inspire, educa... More collection has 25 tubes with a chromatic range of two octaves, g to g2. The tubes are 1 1/2 inches in diameter and vary in length from 75 1/2 inches to 36 1/4 inches. They are mounted on two rows and have a hand-lever mechanism in order to dampen them after striking. This set was used many times by the CBS Radio Orchestra in New York.