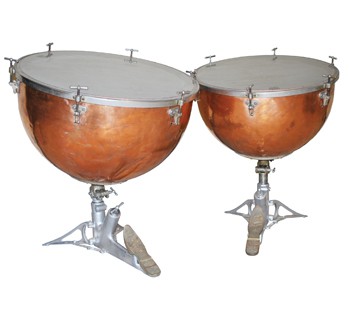 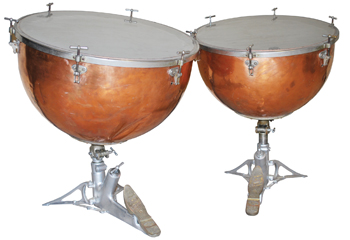 Patented November 17, 1925 by William F. Ludwig and his brother-in-law, Robert C. Danly, Ludwig & Ludwig’s Natural-Way, Balanced-Action “Pedal Tuned” Tympani revolutionized the use of timpaniVery large bowl-shaped drums made of copper or brass. Most often used in orchestras and symphon... in the 20th century. Though two earlier patent dates for timpani appear on the pedal, the “patents pending” marking refers to two truly innovative designs for this drumA hollow cylindrical shell of any size that has a head stretched over one or both ends and is b...: the “balanced action” tuning mechanism and a removable, adjustable base that maintains the fundamental tension of the head.

The “balanced action” pedal tuning system provided performers a simple, quick, and effective method of tuning the drums by foot that required no unlocking ratchet device or use of the hands. This simplification of the tuning process thus increased the ease with which performers could learn to play, as well as the time it took to change pitches during a performance, thereby promoting greater use of the instrument and more advanced tuning repertoire.

The removable base allowed players to easily pack the lightweight drums in two transport cases and is designed to adjust not only the height of the drum, but also the angle, thus allowing a performer to be seated while playing. These features greatly increased the use of timpani in popular touring bands and orchestras and encouraged drummers to add timpani to their “trap set” for both show and musical purposes.

The immediate popularity of the Ludwig & Ludwig timpani can best be illustrated by the fact that, by 1926, 56 orchestras in the Chicago area had adopted these instruments and nearly every major American symphony orchestra had purchased a set.

These drums, whose height can be adjusted, stand about 32 inches tall and measure 25 inches and 28 inches in diameter. The six-lug bowls are single-piece, polished copper, and the hardware is nickel plated. Six metal rods on the interior of the bowl connect to one lug each, and this “spider” mechanism connected to the central pedal post adjusts the tension of the head. This drum model was also available in 26- and 29-inch diameters and with an eight-lug design, which was the most popular configuration. This model sold for $350 in the 1928 Ludwig Drums catalog.