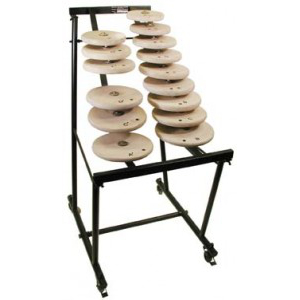 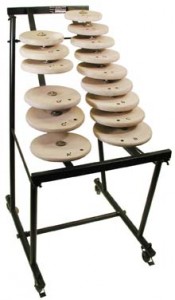 A lithophone is a pitched percussion instrument having keys (or bars) made of stone. Early instruments of this type, called pien-ch’ing, are first found in China with plates constructed in an angular shape. During the 19th century, the instrument was called a “rock harmonica” and constructed from rough slabs of stone.

This instrument has a range of A-sharp7 through C8 with disks ranging in diameter from 8-1/2 inches to 6 inches. The thicknesses of the disks vary from 9/16 inch to 13/16 inch, though this is not consistently graduated from the lowest to the highest pitch due to the process used when tuning a disk.

Each disk is bolted through a center hole to a metal support and is mounted with rubber and metal washers, providing insulation for the disk as well as stability. The stand, which has four locking wheels, is 18 inches by 24 inches at the base and has an overall height of 38-1/2 inches.