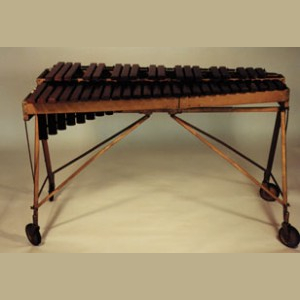 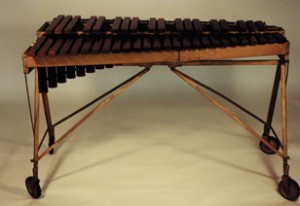 Made by the Leedy DrumA hollow cylindrical shell of any size that has a head stretched over one or both ends and is b... Company, circa 1927 Donated by James Cantley

PASThe Percussive Arts Society is a music service organization whose mission is to inspire, educa... More Hall of Fame member Haskell Harr may be best remembered as the author of the popular elementary drum methods, but he was also an active performer and educator throughout his long career.

Harr began playing music at the age of thirteen and was soon working with local bands and combos. He formed The Haskell Novelty Trio with a saxophonist and pianist, and the group performed frequently on radio and in the theaters. A Chicago area reviewer described Harr as ‘a wizard on the xylophoneA keyboard instrument consisting of metal or wooden bars that are tuned and played with mallets...,’ comparing his playing to ‘George Hamilton Green, Homer Chaffee, Frisco, Shutts, and all the leading exponents of this instrument.’

This xylophone is a ‘Green Brothers Special’ model manufactured by the Leedy Drum Company. Harr purchased the instrument around 1927 and kept it for most of his professional career.

In 1933 Harr played at the Chicago World’s Fair, where he accompanied the famous Sally Rand during her ‘fan dance.’ At the end of each performance, Rand would wave to the audience from the stage curtain, where she would lean on Harr’s xylophone. Harr had placed a small towel on this spot so the dancer wouldn’t get chilled, and she responded with an autograph, ‘Hurrah for Mr. Harr, and my ‘back-up’ xylophone.’