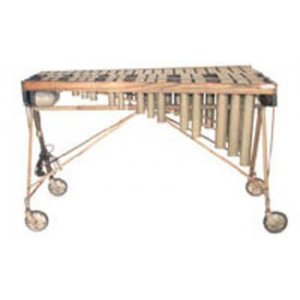 Herman Winterhoff, of the Leedy Manufacturing Company, began experiments around 1916 to create a vox humana or tremolo effect on the company’s steel marimbaphone. After initial attempts that raised and lowered the resonator banks, oscillating fans inserted inside the tubes proved successful, and the vibraphone was born. Driven by an electric motor and two drive belts, the rotating fans opened and closed the resonating chamber creating the desired vibratoRefers to slight variation in pitch to create a reverberating, fuller sound. This is a common t... effect.

This instrument was marketed under the trademark ‘Vibraphone’ in a limited production of about 25 instruments from 1924 to 1929. It has a range of three octaves, F to F, with graduated steel bars 1/4-inch thick. The lowest sounding bar is 2 1/4 x 12 15/16 inches, and the highest is 1 1/2 x 9 3/4 inches. The motor has a simple on-off switch and a lever to adjust the rotating speed of the fans. This instrument shows tuning patent number 1632757, but no model number. It was later marketed as model number 42A, with a 2 1/2-octave version (F to C) available as model number 42B. In 1929 the catalog price for the three-octave instrument was $250.

Of note is the fact that this early instrument has no damping mechanism and has a metal retaining bar on top of the bars to keep them in place. The pedal damping mechanism was invented in 1927 by William D. ‘Billy’ Gladstone who was using the instrument at the Capitol Theatre for broadcasts of the Major Bowes’ Family Hour show over radio station WEAF. The mechanism was first available as an add-on to the instrument, which clamped into place. The vibraphone was available with natural finished wood and steel bars (as pictured) or could be specially ordered with the frame in either Black or White Duco enamel finish and a ‘Nobby Gold’ finish for the bars and other metal parts.

By 1928 the J.C. Deagan company had developed a competing instrument, the ‘Vibraharp,’ with a permanent pedal (patented) and bars made of aluminum. Due to the competition from the Deagan Vibraharp, the Leedy Vibraphone was entirely retooled with aluminum bars and attached pedal in 1929.

In addition to Gladstone, performers who broadcast and recorded on this early instrument include Signor Friscoe, the Green Brothers, Murray Spivack, and George Marsh. This particular instrument was originally owned by the Warner Bros. Studios in Hollywood and was perhaps used on early cartoon or movie soundtracks.