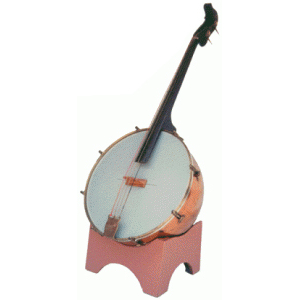 The Timp-Bass is constructed from an 8-lug, 26-inch kettledrum and measures 62 inches in length. The fingerboard is fretted, and the instrument sounds the same range as a normal upright double bass.

During the 1920s and ’30s, novelty instruments were the rage of radio and the stage. Although not strictly a percussion instrument, this ‘Timp-Bass’ is an upright string bass with a body made from a 26-inch kettledrum. The drumA hollow cylindrical shell of any size that has a head stretched over one or both ends and is b... originally had a calfskin head and was manufactured by the Leedy Manufacturing Co. in Indianapolis, Indiana.

Although the exact year of manufacture is not known, the instrument can be dated by the cursive logo, which appeared in 1925, and the fact that Leedy moved to Elkhart, Indiana in 1930. This places the date of manufacture in the late 1920s. Leedy also manufactured banjos during this time period, so it was not a large step to develop a string instrument from their percussion inventory.

The famous Green Brothers, Joe and George, were well-known for their use of novelty percussion instruments, and when photographed with their large assortment of instruments, included this type of bass in the picture. Most likely, the instrument in the PASThe Percussive Arts Society is a music service organization whose mission is to inspire, educa... More collection is the same instrument shown in the photograph, and may be the only such instrument in existence. The Green Brothers had many other novelty instruments manufactured for them by Leedy, including a glockenspielAn instrument that contains tuned metal bars mounted on a rectangular frame. The bars usually c... made of glass bars, the Octarimba and early models of the vibraphone.