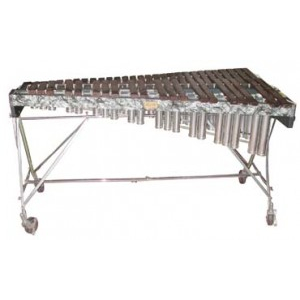 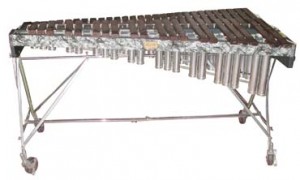 After a short joint venture with partner Sam Cooley in 1898, Ulysses G. Leedy incorporated his Leedy Manufacturing Company, located in Indianapolis, Indiana, in 1900. Beginning with drums and hardware, the company expanded the product line over several years to include all types of sound effects for the theatre and silent movies, as well as a full line of malletA type of drumstick used to strike a percussion instrument. The shaft of the mallet is often ma... instruments.

By 1910 Leedy had built a 25,000-square-foot factory—the largest drumA hollow cylindrical shell of any size that has a head stretched over one or both ends and is b... company in the world. With endorser artists like George Hamilton Green, Jr. and his brother, Joe Green, their mallet line of instruments quickly became popular choices for the drummer/percussionist during the 1920s and 1930s.

Leedy’s Solo-Tone Broadcaster Xylophone had been “adopted” by “over five-thousand professional, school and home xylophone players,” according to Leedy Catalog “T” (1933). It was available in either a 3 1/2-octave range (F to C, Model 5620) or the 4-octave range (C to C, Model 5621) shown here. This 4-octave instrument is 59 inches in length and 34 inches in height. It weighs 83 pounds and has a “split rail” frame construction, which is finished in the optional “Full Dress Pearl” covering. The bars, all 7/8-inch in thickness, range in size from 1 3/4-inch to 1 1/2-inch in width and from 16 1/2 inches to 5 1/2 inches in length.

The “Leedy / Elkhart, Indiana / U.S.A.” plaque indicates that this instrument was manufactured after sale of the company to Conn in 1929, which resulted in a move from Indianapolis to Elkhart. By 1936, a change in frame design had occurred for the Leedy model xylophones, so this instrument dates from the first half of the 1930s. In 1933, during the midst of the Depression, the catalog price was $190.00, with optional cases costing $35.00.