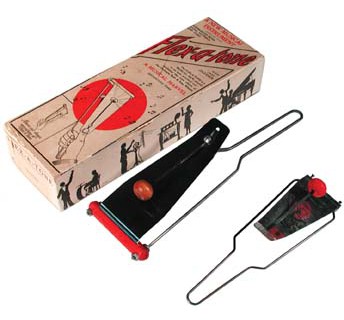 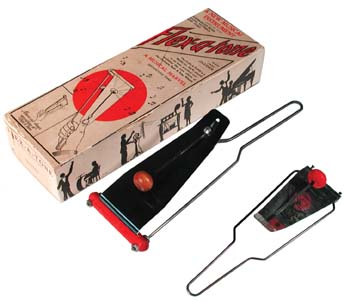 Invented by William Bartholomae, of New York, NY, the Flex-a-tone was patented in the United States as a musical toy on May 1, 1923. It was then manufactured and marketed by the Playatone Co. as a “New Musical Instrument” that was “Easy to Play” and that “Harmonizes with Radio, Victrola, and Piano.” Its box also stated that “The FLEX-A-TONE is a MUSICAL SAW, played in an easy, practical way–combining the tone effects of the Orchestra BellsAn instrument that consists of tuned metal bars mounted on a rectangular frame, and played with... & Song Whistle.”

The Flex-a-tone is constructed with a wedge-shaped steel sounding plate mounted on a metal and wood handle. Attached to the plate are two flexible wires, each with a wooden ball on the end. When the instrument is shaken, the two balls alternately strike the plate in rapid frequency at the discretion of the performer. As the balls strike the plate, the performer presses on the free end of the plate with his or her thumb, which varies the tension of the plate and results in a change of pitch.

With practice and a good ear, exact pitches can be produced, rendering a performance similar to the sound created when bowing a musical saw, but with a tremolo due to the two balls. The sound most often heard, however, is the glissando effect with either a rapid rise or fall in pitch through the entire range of the instrument.

Although it is considered a toy or novelty instrument, the Flex-a-tone did find its way into several serious compositions in the early 20th Century. For example, Schoenberg included the Flex-a-tone in his “Variations for Orchestra” No. 3, Op. 31 and his opera “Moses und Aron.”