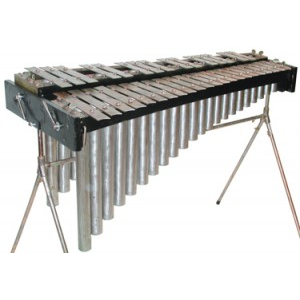 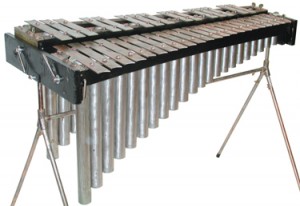 Deagan Marimbaphone with bars in overlapping alignment to allow ease of performing with mallets. Note the two levers on the end of the frame used to instantaneously alter the position of the bars

Manufactured during the first few decades of the 20th century, Deagan’s marimbaphones were designed as novelty instruments for use on the stage or in the home. Deagan Catalog G boasted that the instrument “is a most valuable addition to any orchestra in which it will replace the Italian Harp,” would “blend perfectly with the voice,” and was “very adaptable for home use.” It further described the instrument’s tone and use by saying that “as the instrument is very simple to play and the tone is of absolutely the very finest quality, being similar to that of Musical Glasses, it makes an ideal instrument for a Music Room.”

The marimbaphone’s bars were manufactured of high-quality steel, which provided excellent sustaining characteristics and projection. The instrument has several unique features, the most important one being the ability to independently rotate each set of bars to a vertical position, allowing the performer to bow the bars on the ends. Additionally, each bar was manufactured with a curved end to assist with the bowing technique.

When the bars are in the horizontal position, the performer has the option of positioning the accidentals at the same level as the naturals, or in the more familiar raised and overlapping position seen on most malletA type of drumstick used to strike a percussion instrument. The shaft of the mallet is often ma... instruments today. The instrument can be struck with mallets as well as bowed when in the horizontal position, and can be performed on by more than one player using both techniques if so desired.