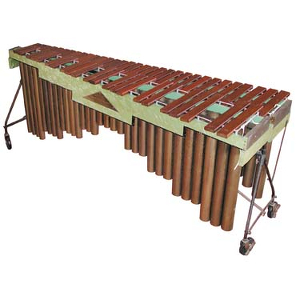 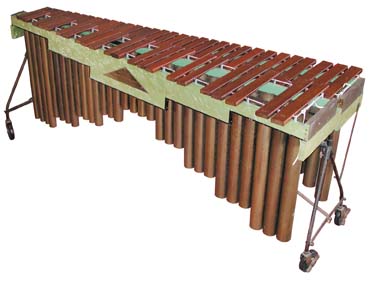 1933 Chicago World’s Fair Model Century of Progress MarimbaAn instrument that consists of a large frame and a set of tuned wooden bars which are struck wi....

In 1933, Clair Omar Musser, who was at that time an employee of the J. C. Deagan Company, assembled a group of 100 musicians to perform as a “marimba orchestra” on the steps of the Hall of Science building for the Chicago World’s Fair. The World’s Fair Marimba Band performed two concerts a day from August 19 to August 26, 1933, for this Century of Progress celebration of the city of Chicago.

For these performances, Musser designed a unique Century of Progress marimba that was symmetrical in appearance in keeping with the art deco designs utilized throughout the fair. Decorated in green “mother of pearl,” the 100 marimbas were built for and purchased by their designated players, each one being labeled with a triangular plaque bearing the player’s name. Of the 100 instruments, 25 had a range of 4 1/2 octaves (c-f) and 75 had a range of 3 1/2 octaves (f-c), each of which were purchased for $500 or $350, respectively.