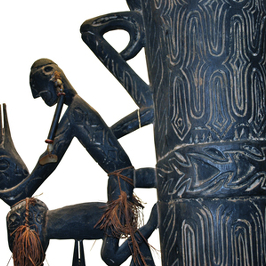 The Asmat are a tribal group who inhabit parts of Papua, Indonesia, in the area formerly known as the Irian Jaya province of the Merauke regency on the island of New Guinea. The Asmat are sometimes known as “tree” or “wood” people based on the origin myth in which their ancient god, Fumiripitj, carved a tree trunk into a long cylindrical drumA hollow cylindrical shell of any size that has a head stretched over one or both ends and is b... and, when he played upon it, the drum came to life as a man. The tribe is known not only for its highly developed art of wood carving, but also for its practice of headhunting and cannibalism, which lasted well into the 20th century.

This tribal drum is a detailed chanting drum that features many characteristics of the drums of the Asmat, including their use of only three colors—black, red, and white. It is carved into an hourglass shape from a single piece of dark wood, probably found in an inland region of the island. The lizard-skin head is traditionally glued to the shellThe cylindrical body of the drum, usually made from plywood. with a mixture of human blood and lime, and held in place with a band of braided plant fibers. It is initially tuned by being held over hot coals or flame. In this culture, carving is men’s art; work with fibers is women’s art.

The ornately carved handle depicts both man and bird shapes, all of which are decoratively wrapped with hanging twine. Symbolically, carvings of men often are shown with their elbows touching their knees to represent the fetal position, while pecking birds represent both birth origins and the practice of headhunting—a bird “pecking” off the head of a man. The drums are played in large groups of instruments, held by the handle in one hand and struck with the other, and are sometimes played while dancing in full-body costumes made of bark, fiber, and leaves of the sago tree.

This hourglass-shaped drum measures 60 inches in height, with a base diameter of 8 1/4 inches and a top diameter of 7 1/2 inches. The middle is 5 inches in diameter, and the entire length of the drum features deeply carved ornamental designs. It is colored with mud from rivers of the region and with a black coating created by mixing pig grease with soot. The drum was first collected by the Sumatra-born explorer Thony Axle, acquired by Joseph Yaggi in Februrary 1994, and was probably made during the early part of the 20th century.