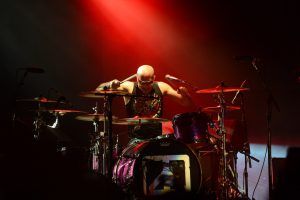 Rhythm! After Hours featuring Kenny Aronoff – one of the world’s most influential and in-demand drummers and percussionists.

Voted “Best Intimate Concert Series” by Indianapolis Monthly in 2017, the Rhythm! After Hours performance series brings high level drummers and percussionists into the Indianapolis community for an intimate evening. See the schedule below!

ABOUT KENNY ARONOFF
Rolling Stone cited Kenny as one of the “100 Greatest Drummers of All Time” and Modern Drummer named him #1 Pop/Rock Drummer and #1 Studio Drummer for five years. The list of artists he’s worked with on the road and/or in the studio includes John Mellencamp, John Fogerty, Bruce Springsteen, Paul McCartney, Ringo Starr, Sting, Lady Gaga, and many more. See the full list here: https://kennyaronoff.com/about/discography/

TICKETS: $30 | ONLY 150 WILL BE SOLD
Tickets for this adult-only event include entrance to the museum and two free beers, courtesy of Sun King Brewery. Attendees must be 21 or older.

Rhythm! After Hours is partially funded by a generous grant from the Christel DeHaan Family Foundation.