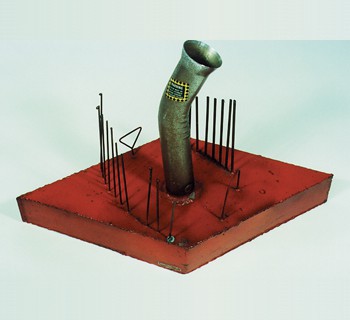 Donated by Florence Manne. This Waterphone stands four feet tall, resting on its metal rods, and is signed by the creator: ‘Richard Waters, Fairfax, CA, 19710

Invented and patented by multi-media artist, musician and kinetic sculptor Richard Waters, the Waterphone is a unique instrument that blends the principals of a Tibetan water drumA hollow cylindrical shell of any size that has a head stretched over one or both ends and is b..., a kalimba and a 16th-century nail violin.

Waters developed the Waterphone in 1967 and has also applied the use of water to other percussion instruments, including gongs, quicas, drums and chimesAn instrument consisting of a series of cast brass tubes, which are mounted and arranged in ord.... Initially used for special-effects sounds, the instrument also had an unexpected function, as related by Waters in a 1984 Percussive Notes article:

‘Shortly after I invented the waterphone, Jim Nollman, a drummer working for Greenpeace, took a Bass Waterphone to Hawaii where he called a pod of whales which circled him as he played and was kept afloat by the waterphone. Since that time, several whale conservation groups both here and abroad have utilized waterphones for interspecies communication with whales and other cetaceans.’

The Waterphone consists of a bowl that holds the water, a resonator tube or handle, and metal rods of varying length and size. The rods are tuned to a combination of microtonal and diatonic pitch relationships. The rods are struck by mallets, plucked by fingers or bowed. As the player strikes a rod and turns the instrument, the water in the bowl moves, shifting the shape of the resonating chamber, creating pitch changes and bends, glissandi and water echoes.

Waterphones have been used in recordings by Miles Davis and George Marsh, and on film and television soundtracks, including Poltergeist, Star Trek: The Movie and The Man Who Skied Down Everest.