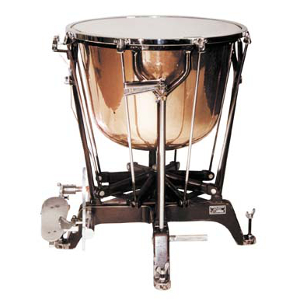 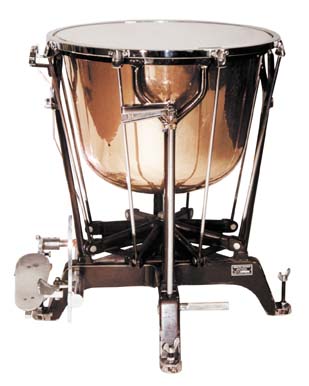 Ringer 23-inch timpano, showing the fine-tuning handle mechanism and the distinctive camber-shaped timpaniVery large bowl-shaped drums made of copper or brass. Most often used in orchestras and symphon... bowl

Immediately following World War II, Günter Ringer, father of the timpanist of the Berlin Philharmonic, recognized the need for the manufacture of high-quality, Dresden-style tympani. In addition to the high quality of the instruments, he revolutionized the basic design of the clutch and ratchet pedal tuning mechanism by moving the lever arm to the far side of the player. This resulted in a more efficient weight balance by the performer’s foot and eliminated the need for counter balancing weights.

First sold only in Europe, Vic Firth became the U.S. importer for the drums during the early 1960s. In April 1969, Ludwig Industries purchased the patents from Ringer, and began manufacturing the drums in their Damen Ave. (Chicago) plant during the 1980s. Selmer-Ludwig Industries continues to manufacture this Ringer design as their highest quality timpani at their La Grange facility.

This 23-inch timpano is the “standard” size piccolo drumA hollow cylindrical shell of any size that has a head stretched over one or both ends and is b... manufactured by Ringer. It was purchased through Vic Firth, Inc., ca. 1963, by Salvatore Rabbio, timpanist for the Detroit Symphony from 1958-1998.