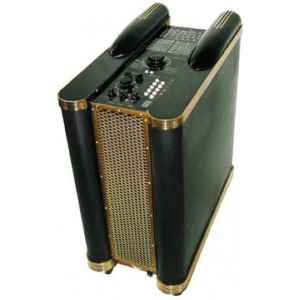 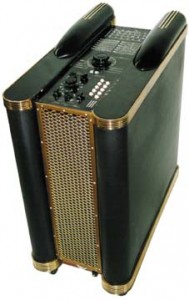 The Musser Maestro MarimbaAn instrument that consists of a large frame and a set of tuned wooden bars which are struck wi... Metron

Clair Omar Musser designed and built his “Musser Maestro Marimba Metron” as an accompaniment instrument to his solo malletA type of drumstick used to strike a percussion instrument. The shaft of the mallet is often ma... performances. The instrument plays thirteen electronically-generated “tempi figures” including ten standard dance rhythms such as the bolero, waltz, rhumba, cha-cha, tango, samba, and beguine. In addition to the ability to produce both electronic metronomeA clicking device that sets the tempo for a rhythm or song. It measures time in BPM (beats per ... pulses and duple meters using five different drumA hollow cylindrical shell of any size that has a head stretched over one or both ends and is b... and cymbalA copper/bronze (or variation of metal alloy) disk struck with a drumstick or crashed together ... beats, a wide range of individually activated percussion instrument tones is also available.

The percussion tones, operated by pressing or striking the buttons, include bass drumThe lowest pitched drum in a marching band or with a drum set. A two-headed drum, it is usually..., two tom-toms, two temple blocksA set of wood blocks that vary in size and pitch, are generally mounted on a stand and played w..., woodblock, clavesA pair of cylindrical wooden sticks that are clicked together, and often used to keep time in L..., and maracasHollowed out gourds on a stick, filled with seeds or pebbles to make a rattling sound. A simply... sounds, along with two real cymbals that are mounted inside the case and struck by solenoid action. Nancy Preusch recalls that Musser struck these buttons with his mallets, causing noticeable abrasions to the painted wooden framework.

Musser personally used this instrument, commonly referred to as his “RhythmThe systematic arrangement of musical sounds, which creates a flowing and/or syncopated pulse. ... Machine,” not only for performances, but also for teaching in his studio at Northwestern University and in his music room at Studio City, California. As it is built with end frames of the same design as his Canterbury marimba, it apparently dates from 1949-52, and was manufactured using vacuum tube electronic technology from that era.