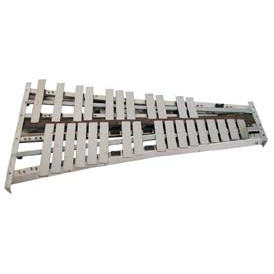 Clair Musser’s interest in amplified vibraphone design dates from the late 1920s, with his work on the MarimbaAn instrument that consists of a large frame and a set of tuned wooden bars which are struck wi... Celeste designed for J.C. Deagan. Musser’s interest in this experimental field throughout his most creative years is confirmed in a letter Don Moors wrote in November 1973, recalling their meeting two months earlier when they discussed “different possible methods of amplifying vibes.” This letter points to the period when Musser was apparently at work on the two prototype amplified vibraphones featured here.

Designed solely as electronically amplified instruments, Musser’s prototype Amplified Vibraphones incorporate a passive pickup assembly, which comprises two straight bars, one mounted beneath the natural keys and one mounted below the accidental keys. This pickup is a magnet with coiled wires running underneath, similar to the type of pickup that first appeared in 1950 and is still used to amplify electric guitars today.

Several structural features in the silver-bar instrument (2002-10-03) should be considered design improvements over comparable elements in the smaller gold-bar instrument (2002-10-04). Among the improvements found on the larger instrument is the use of soldering on the electronic pickup bars, a more advantageous layout of the electrical cable, wider bars for ease of playing, and a more sophisticated dampener mechanism. Also, the rails are designed to better align with the inside and outside shape of the bars, unlike those on the gold-bar instrument whose pegs are aligned exactly the same for both the natural and the accidental bars. The full range of bars originally created for these instruments is no longer complete.