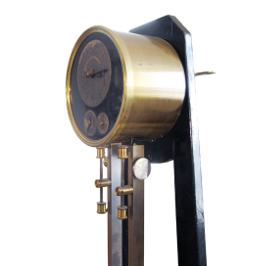 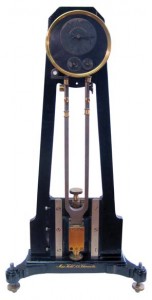 The tuning fork clock was first described by N. Niaudet on December 10, 1866 and subsequently displayed at an exhibition in Paris in 1867. As a timekeeping device, the tuning fork acts in the same way as a pendulum by opening and closing an escapement device at a regular interval of time, thereby advancing the gears and wheels of the clock at a precisely measured interval as it moves back and forth. Spring wound, it is highly accurate, and when constructed with a fork having 64 beats per second (counting 128 swings back and forth), it would produce a total of 11,059,200 vibrations each 24-hour period of time. The speed of the vibrations can be adjusted by means of small, threaded weights on the end of the fork that enables the operator to tune the fork up to a semi-tone in range, or from 62 to 68 vibrations per second.

For scientific purposes, the German physicist and acoustician Rudolph Koenig (1832–1901) utilized the tuning fork clock to demonstrate frequency ratios for sound and pitch, which ultimately led to the standardization of A=435 in France. Koenig did this by aligning Niaudet’s tuning fork clock with a vibration microscope at right angles, marking the end of one fork with chalk so that it is visible in a microscope, and then observing the resulting Lissajous figures—visual patterns that clearly illustrate the ratios produced by two vibrating objects. A figure with a 2:1 ratio would indicate the interval of an octave, 3:2 the interval of a fifth, and so on for each possible pitch when compared to the pitch of the fork on the clock.

By counting the ratios, it is then possible to tune other forks to any desired pitch by grinding them to the correct length. At the time, it was the most precise method of establishing an exact, absolute pitch. In addition, the tuning fork clock could demonstrate the effect of temperature on the pitch of a fork by observing a change in speed when the temperature was raised or lowered.

This tuning fork clock was manufactured during the first decade of the 20th century by Max Kohl A.G., in Chemnitz, Germany. It was owned by the J. C. Deagan Company and most likely used to precisely tune the forks and other pitched instruments manufactured by Deagan. It was also probably used by Mr. Deagan as a scientific device for his research into acoustics and tuning, which resulted in the standardization of A=440 in the United States.