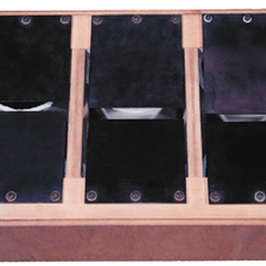 A large sansa, or Afro-Cuban linguaphone, this marimbula consists of eight metal sounding strips mounted over a large rectangular resonating box. The instrument is played by plucking the metal strips, and produces sixteen tones, one for each end of the metal strips. In Jamaica, the rumba box, as the instrument is known there, plays the bass part to accompany guitars, banjos, percussion, and various solo instruments in a calypso band. In Cuba, the marimbula serves a similar function for the bands, playing a style known as son. These bands are known as son conjuntos. This instrument measures 27” in length, 17 1/2” in width, and 8 3/4” in height, and dates from ca. 1930.

The lujon, or loo-jon, is a pitched, bass metallophone of American design. It has six to twelve rectangular plates of spring steel, each of which is attached by three screws to the edge of a rectangular sounding box. This instrument measures 29” in height, 13 3/4” in width, and 8 3/4” in depth. Each of the six plates measures 3 1/2” x 3 3/4”, and is placed over 3 1/2” plastic resonating pipe. When played with timpaniVery large bowl-shaped drums made of copper or brass. Most often used in orchestras and symphon... or yarn mallets, the instrument sounds like a metal log drumA hollow cylindrical shell of any size that has a head stretched over one or both ends and is b.... Having little acoustical carrying power, the lujon is most effectively used with some type of sound enhancement or for studio recording. When used for recording, the instrument may be played with mallets made from rubber balls and knitting needles. In addition to its use in television and movie scores, the instrument appears in the music of Luciano Berio (“Circles”).