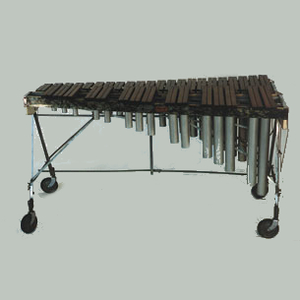 Made by Leedy DrumA hollow cylindrical shell of any size that has a head stretched over one or both ends and is b... Co.
circa 1930s.
Instrument donated by the Celeste and Emil Richards Estate.

The Octarimba was designed by the Leedy Drum Company to combine the ‘full resonant speaking voice of the marimba’ with the ‘higher and more brilliant timbre of the xylophoneA keyboard instrument consisting of metal or wooden bars that are tuned and played with mallets....’

Each playing note of the Octarimba consists of two adjacent rosewood bars tuned one octave apart, each with an appropriately tuned resonator. The bars are played simultaneously with double-headed forked mallets. The result is a four-octave sounding range from an instrument with a three-octave playing range.

An advertisement in the August 1934 Leedy Drum Topics states, ‘The Octarimba is a legitimate musical instrument in every way and should not be considered a novelty.’ A 1935 ad extols, ‘Never before has there been a wood-bar instrument to equal the Octarimba’s eloquence, sympathetic response or latitude of expression!’

The instrument sold for $240 in a choice of three finishes with five sets of the double-headed mallets, which have proved to be more rare than the instrument itself. Leedy made only fifty Octarimbas during the 1930s: 25 of the instruments were tuned from F to F, and 25 were tuned from C to C. To increase sales, later instruments were sold with a set of both Octarimba bars and regular marimbaAn instrument that consists of a large frame and a set of tuned wooden bars which are struck wi... bars. Although the instrument never caught on, Joe Green released a 1938 recording for the Decca label playing ‘My Toreador’ and ‘Lady of Madrid’ as Octarimba solos with organ accompaniment.