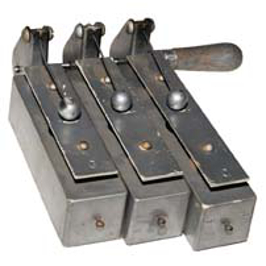 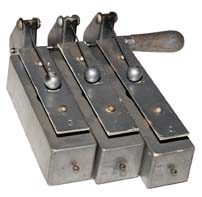 A three-pitch rattle, which sounds a C major chord

Among the novelty items the J. C. Deagan Company manufactured early in the 20th century were pitched Musical Rattles. These rattles consist of a single, pitched metallic bar mounted to a rectangular resonating chamber, all of which is attached to a handle with a ratchet mechanism. When spun, the ratchet mechanism causes a small beaterA drumstick, usually with a mallet-type head, that beats the drum. to repeatedly strike the bar.

The Musical Rattles were available in chromatic sets that allowed a musician to perform musical tunes as a novelty or Vaudeville act by picking up rattles in succession to sound the required pitch. If needed, several performers could play these instruments, much like a set of handbells, or the entire set could be mounted on a stand, allowing one performer to crank each handle as needed.

In addition to the single Musical Rattle, Deagan also provided rattles with set chords, where three pitches were attached to one handle. Spinning the rattle resulted in all three pitches sounding simultaneously.