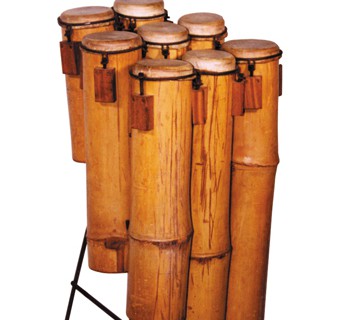 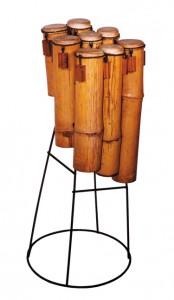 Boobams (bamboo reversed syllabically) are tuned bongos constructed with a shellThe cylindrical body of the drum, usually made from plywood. of natural bamboo. The available width and depth of the shell, which contributes to the desired pitch, is limited only by the size of available bamboo found typically in the tropical islands of the Pacific Ocean. Although boobams appear as ethnic drums in these areas, the modern instrument found its way into current use through its appearance on numerous recordings in Hollywood beginning in the 1950s. A modern version of boobams, using synthetic or wood shells not of bamboo, is marketed under the trade name of Octobans.

Two sets of boobams, constructed for Harry Partch by Bill Loughbrough, were owned and used by Shelly Manne for numerous recording sessions in the Los Angeles studios. Their first use was on the track “The Sound Effects Manne” recorded with Russ Freeman on September 14, 1954.

One set consists of eight drums tuned in a diatonic octave with shells ranging from 12 to 24 3/4 inches in length. The diameters are all approximately 4 inches. This set has calfskin heads and is tunable using a hex key on three lugsThe tension rods (or screws) that hold the hoop and drumhead onto the drum. for each drumA hollow cylindrical shell of any size that has a head stretched over one or both ends and is b.... Currently, the drums are tuned to a scale of B, C, D, E, F-sharp, G, A, B.

The second set, consisting of five drums, has synthetic heads pegged to the shells using six wooden dowels. These drums are 2 1/2 inches in diameter and range in length from 2 1/2 to 13 1/4 inches. As the tuning system is less refined on this set, the pitches are less definite, giving a “relative”pitch to each other based on the length of the tube.